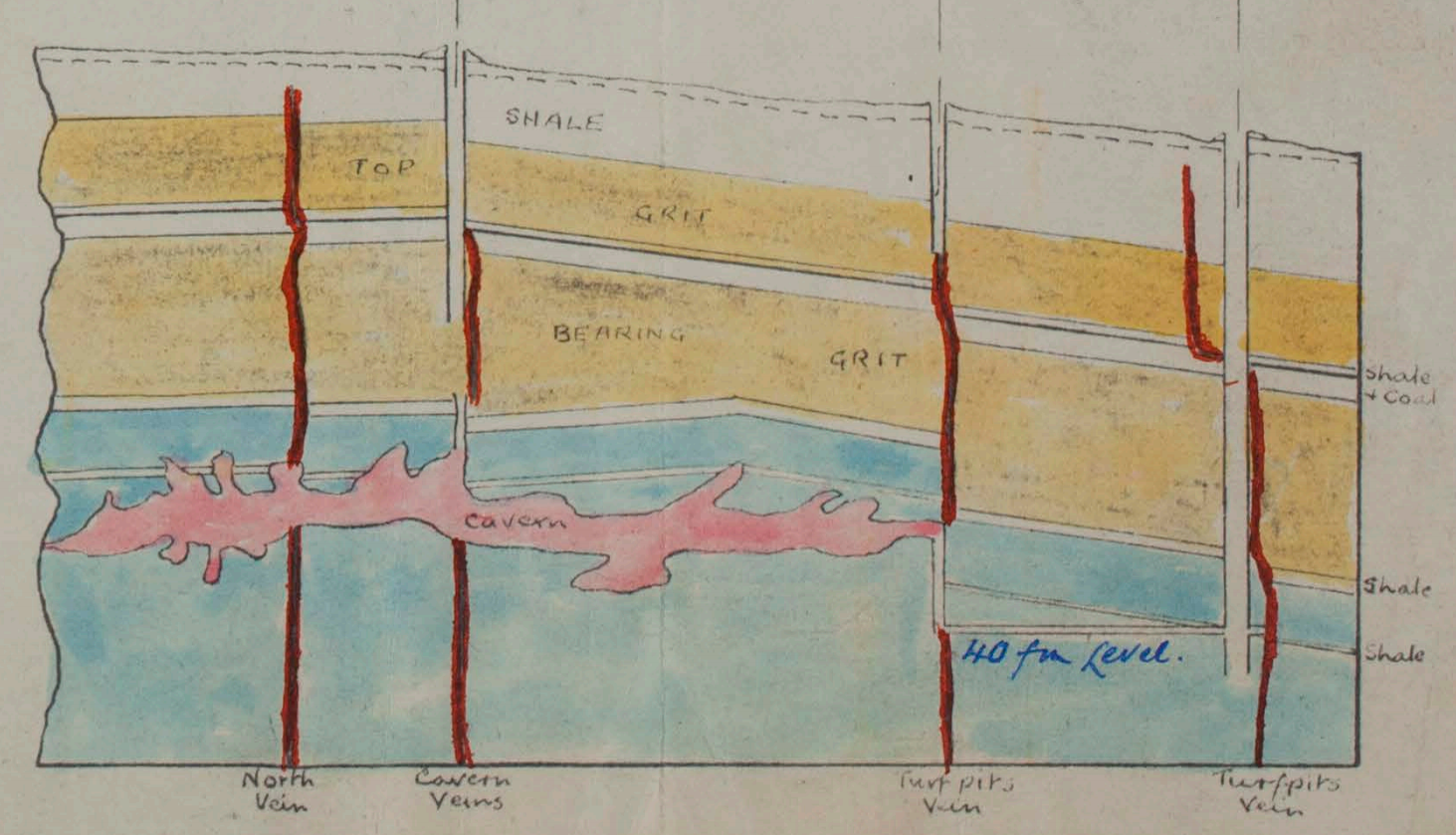 In 1829, miners began sinking the Old Turf Pits Shaft situated in one of the most northernly sections of the Grassington Moor Mining Area. The shaft eventually reached a depth of 94.5 metres and workings were developed from a depth of 73 metres. In around the year 1830, miners dug upwards and broke into two large natural caverns deep under the moor. The caverns are described as being a well decorated phreatic system with three main passages. An east-west passage of about 170 metres and about 10 metres high meets two other passages at its western end. West Cavern heads off to the north-west for about 50 metres, and East Cavern heads off towards the north with about 150 metres of passage. There are various small side passages and oxbows.

It has been speculated that the caverns are a hypogenic maze cave according to the book Hypogene Karst Regions and Caves of the World. These natural caverns were of little use to the miners in search of lead veins, and hardly any details of them were recorded apart from a rough sketch, however two veins passed through the caverns including North Vein and Cavern Vein which were worked from the cave. It is assumed that the unused material from the workings were left within the caverns avoiding the need to haul to the surface.

According to British Mining 13, the depth of the caverns was at 55 metres meaning that the rise was driven upwards 18 metres from the Old Turf Pits workings at 73 metres.  Apparently, there were innumerable side passages which the mine surveyors did not include on their plans and descriptions which have survived speak of fine formations on the roof. Work at the Old Turf Pits ended by November 1839 but there is mention of the shaft being reopened in 1866 with the area around the junction of the Turf Pits, North Caverns and Slanter Veins being explored by crosscuts. The main hauling shaft has since run in with no feasible possibility of reopening it. With no other shafts connecting to the caverns, they became known as the Lost Caverns of Grassington Moor. 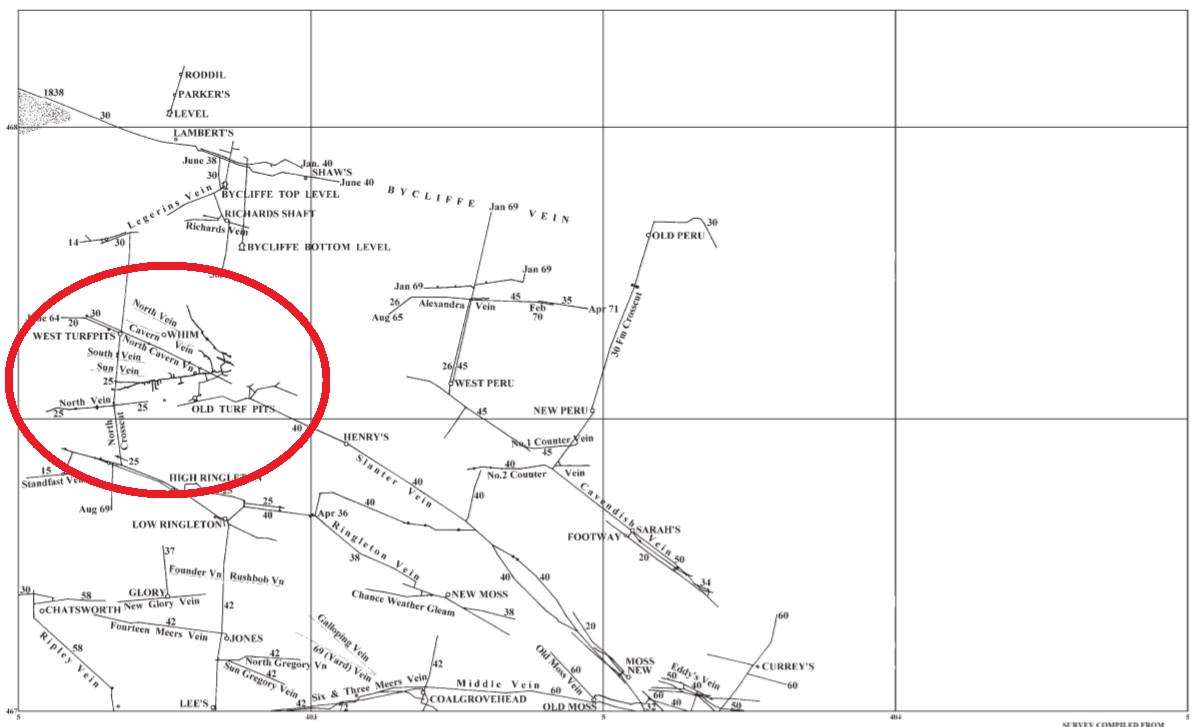 During the late 1930’s, Eli Simpson a founding member of the British Speleological Association, conducted extensive research into the early geological records and mine plans from around Grassington Moor. Simpson believed that a huge underground cave system lay below the moor and which may be the key to the Mossdale Beck – Black Keld cave system. Water from Mossdale Beck enters under Mossdale Scar  and does not resurface again until reaching the Black Keld Resurgence close to Kettlewell. This includes a drop of a 228 metres and interestingly, after the water from Mossdale Beck enters the cave system of Mossdale Caverns, instead of heading towards Kettlewell, it continues towards the Hebden Gill and Grimwith drainage area. Simpson speculated that it may be possible to access this underground cave system via the shafts on Grassington Moor and so throughout the 1940’s,  a small team including Bob Leakey began to descend a number of mineshafts in search of a way into the system. Unfortunately, any shaft that once connected with the natural passages had long since collapsed, and focus was given to the water flowing from Mossdale Beck into Mossdale Scar. Bob Leakey went onto discover the infamous Mossdale Caverns, where in 1967 six cavers lost their lives due to a flood.

In 1962, members of the Northern Cavern and Mines Research Society (NCMRS) attempted to locate an alternative route into the lost caverns via the shafts across Grassington Moor. They initially made a survey of the shafts situated in the general area of the caverns which included West Turf Pits, Old Turf Pits and Whim Shaft. Unfortunately, both West Turf Pits and Old Turf Pits had run in, whilst Whim Shaft would regularly flood to an unknown depth. 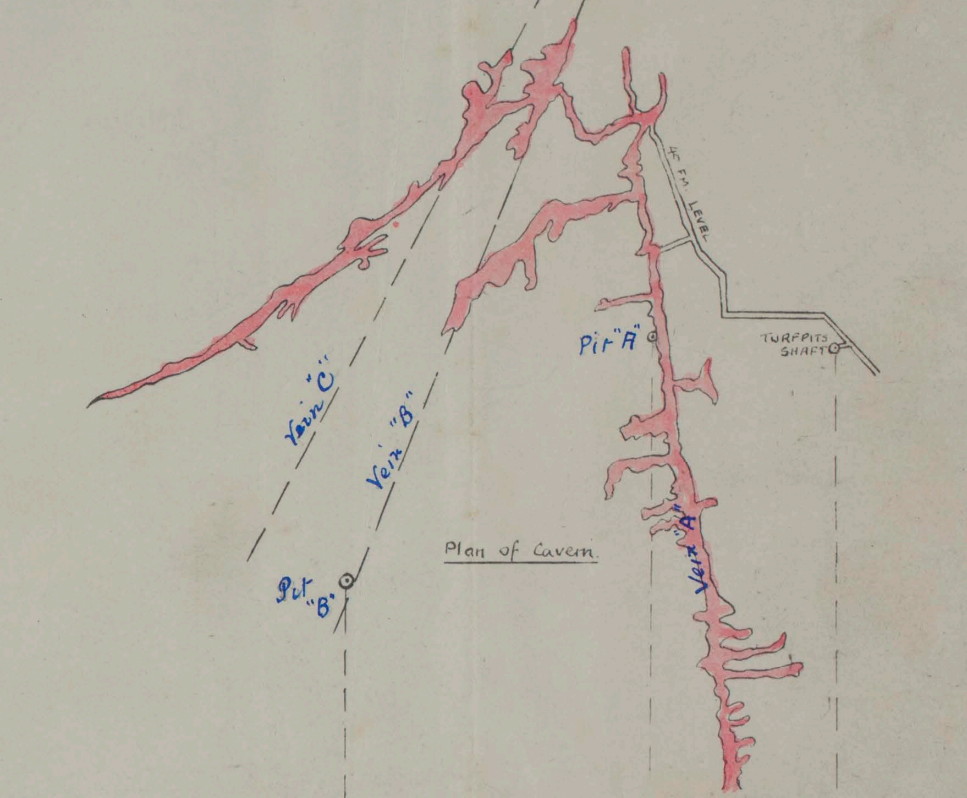 In 2010, a group of cavers discussed the possibility of digging down into the caverns via the online forum ukcaving.com. They discussed various methods including excavating the Old Turf Pits main shaft, to excavating another small shaft purported to be situated directly above the caverns. According to the old mining records, this shaft did not descend as far as the caverns, but it was speculated that a rise may have been driven up to intersect it. Unfortunately, after many pages of discussion, the thread ended abruptly and no further work took place.

Given the numerous records which reference the caverns as well as the detailed sketches of the cave, it can be reasonably assumed that they do exist. However, it is unlikely that they will be accessed anytime soon. According to documents held within the BSA archives (207Y-F Wharfedale), the only shaft that intercepted the caverns was Old Turf Pits. The site of this shaft now contains a large spoil heap with a sizable depression in the centre. More than likely, the internal walling was supported via a wooden collar which after rotting away, would have caused the shaft to collapse. This is the reason that members of GMAG do not conduct descents into mines that are supported on wooden collars.

There are two other shafts close to the Old Turf Pits including Whim shaft and the West Turf Pits. West Turf Pits has also collapsed, with whim shaft currently covered with railway sleepers and spoil. The Grassington Mines Appreciation Group intends on erecting a fence around Whim Shaft and removing the spoil. From here the group does intend on exploring the shaft, however it must be noted that there is no mention of this mine connecting with the caverns.

To reopen Old Turf Pits shaft would be a huge undertaking and is unlikely to ever happen due to financial constraints. Access into the cave system is an exciting prospect that generates keen interest on internet message boards and down the local pub. However these conversations are never likely to materialize into anything more than wishful thinking. For now the Lost Caverns of Grassington Moor shall remain "lost".

The below images show what's left of the Old Turf Pits 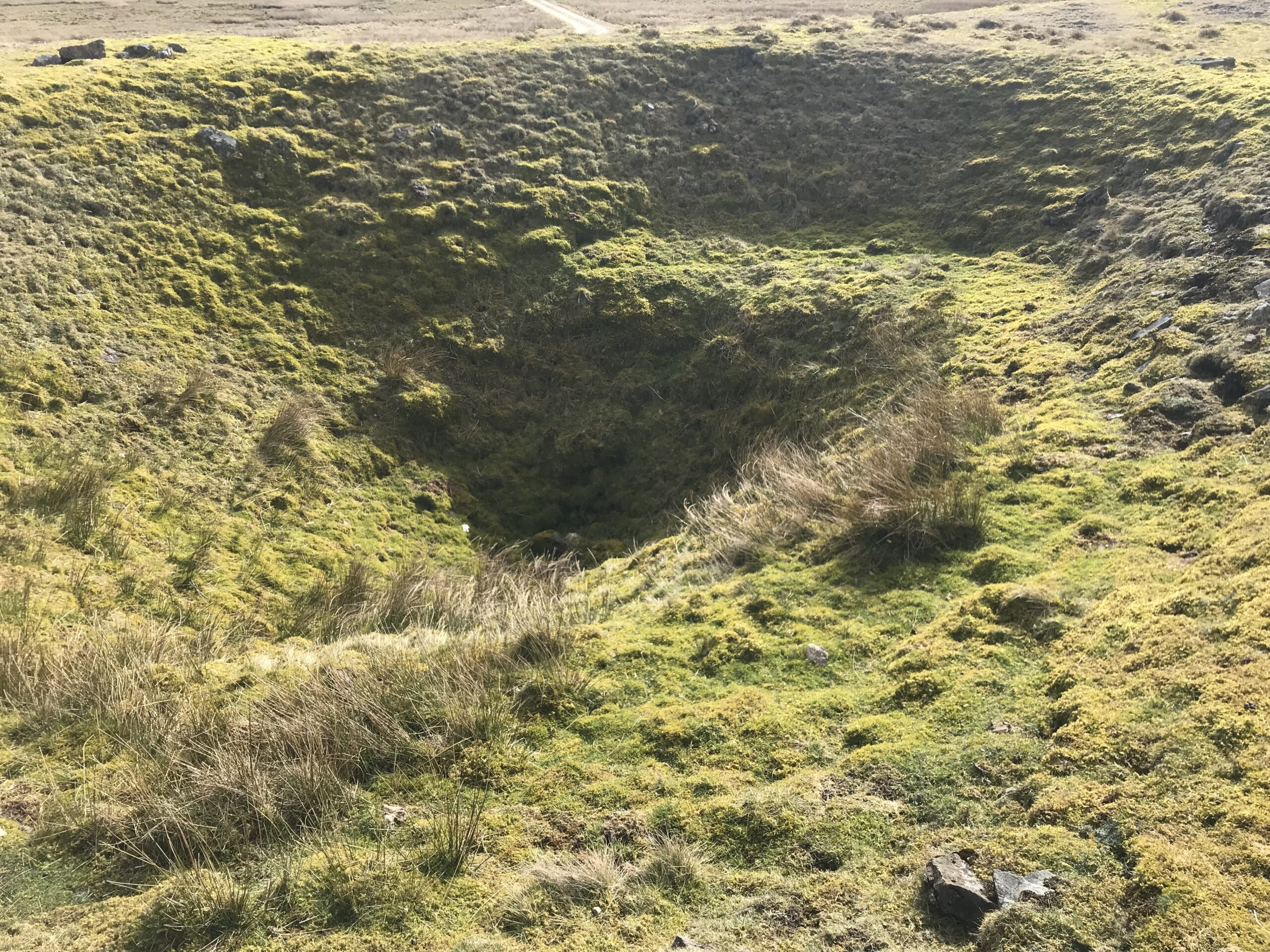 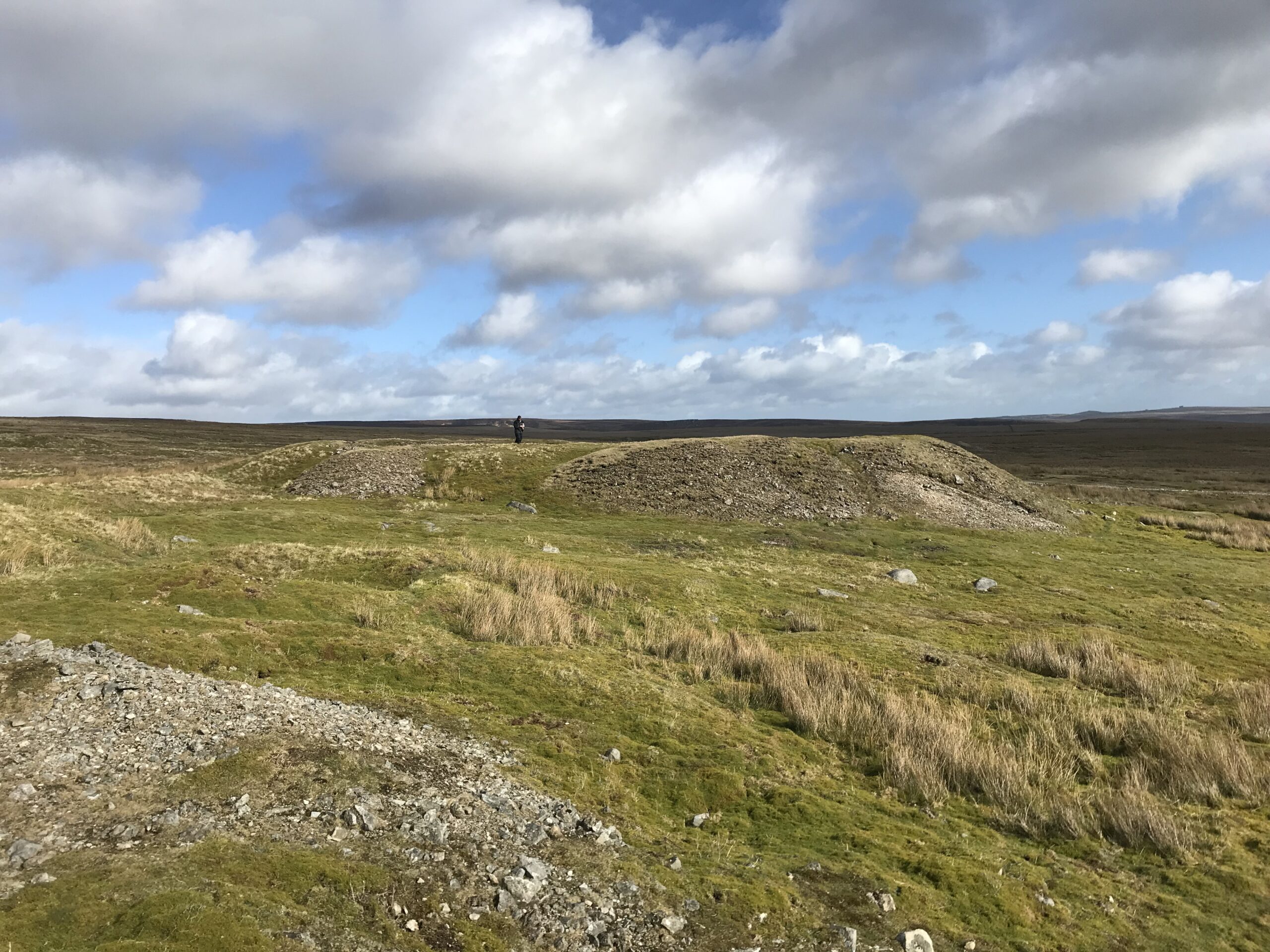