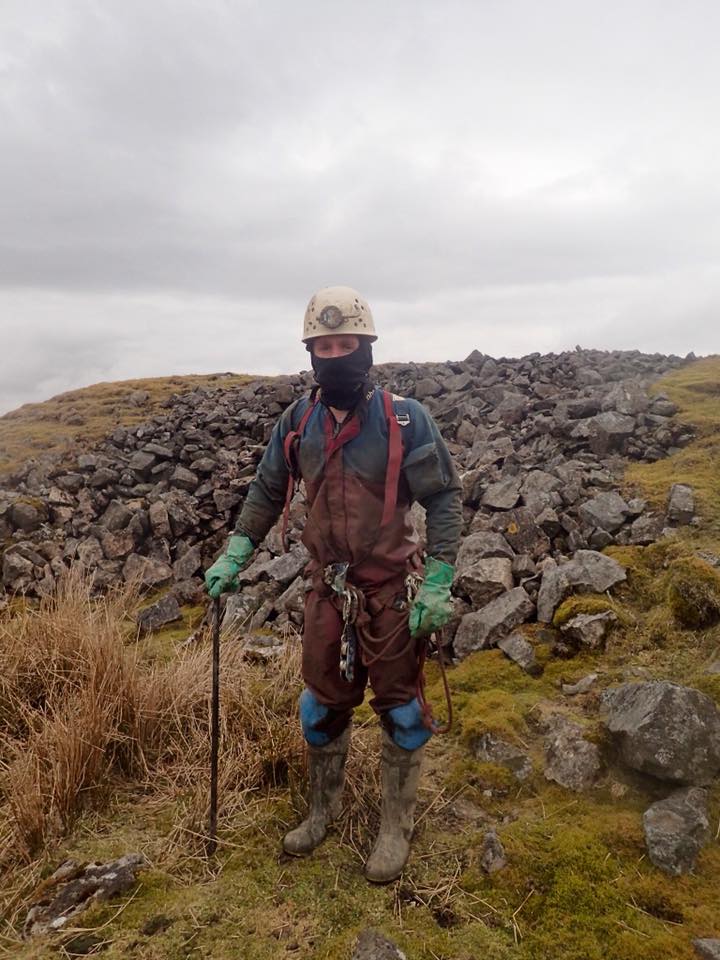 Most of our work over the past few months has centred around the Chatsworth Mine close to the end of Old Moor Lane. After an initial exploration of the mine, we have found numerous passages leading off, as well as a number of artefacts. To date, this is the most extensive mine we have explored and 2 trips have been conducted so far. Following investigation of one of the lower passages, a series of further shafts were discovered running deeper than the main shaft. After bolting these shafts, fixing anchors and attaching digging rope, we were able to explore the mine further, down to a level of approximately 95 metres. Unfortunately, upon reaching the final shaft, we ran out of rope and had to return back to the surface. However, based upon some rough estimates, I believe this final shaft drops down to the 106 meter level.

Looking at the mine records, the 106 meter level is the lowest point of Chatsworth Mine and connects with a number of other mines including Taylors, Somers and Brunt Engine which are currently inaccessible from the surface. In addition to this, the 106m passage also connects with Dukes Deep Level which runs all the way from Hebden a few kilometres south of the Grassington Mines. The Dukes Deep Level is a horizontal passage driven all the way from Hebden Gill in order to drain the mines rather than pump the water to the surface, and to connect with this level from Chatsworth Mine would be an amazing feat. Unfortunately, due to a collapse along Dukes Deep Level, it is no longer possible to access the Grassington Mines from Hebden.

It was during this trip that I had probably the scariest moment of my life and even writing it now I can still feel a pit forming in my stomach. Due to our excitement in reaching the deeper levels of the mine, myself and john had to continued to climb further and further down the shafts at which point we ran out of rope at the head of a further 10m pitch. In our excitement, we had chosen to ignore the increasingly precarious amounts of rotten timbers and piles of rocks stacked on either side of the shafts during our descent, and upon our return back to the main passage way, things began to go wrong.

Stupidly I had decided to stand directly below John as he made his way up the first shaft and as he reached the top, he accidentally knocked one of the wooden stopes out of the wall causing it to plummet to the floor and striking me on the back in the process. Thankfully I was unharmed but things could have gone very different had the wood been holding back a pile of rocks (or deads as they are referred to in mining terms). After this, I decided to stay a few minutes back from John as he made his way along the passage to the next 8 to 10 meter shaft.

As I began to edge my way forward and up the next shaft, I suddenly heard a loud rumble in the distance and the falling of rocks. I began to panic and nervously shouted for John as I climbed upwards to the top of the shaft. It was at this point that an overwhelming feeling of dread washed over me similar to the feeling I had as a child when I thought I had lost my parents in a public place. My mind flashed with images of being entombed within the mine and dying of hypothermia or of not being found by the rescue teams. I continued to shout for John but received no answer. Finally, I reached the bottom of the shaft that John was climbing and found him unharmed but with a large number of rocks in a pile on the floor. It seemed that he had disturbed the wall as he was ascending and a section had become dislodged, falling to the floor.

After a few moments, I gathered my thoughts, waited for John to ascent the final “dodgy” shaft and out onto the passageway leading back to the main chamber and I began to climb. Unbeknownst to me, at the top of this final shaft was a small wooden stope wedged across the roof. As John reached the passage, he reached up and pulled the stope out of the way. In doing this, a huge section of the roof came crashing down, clipping John on the shoulder causing him to cry out, and pinning his caving bag to the floor. To give you some perspective, the section of roof was around a meter in length and half a meter in width and depth and was only a metre or so away from the head of the shaft that I had been climbing out of. Had the section of roof fallen down the shaft, the situation might have ended very differently. Thankfully John managed to escape with only minor bruising to his shoulder and we were able to extricate his bag by levering a crow bar underneath the rock and slowly manoeuvring it out of the way.

Upon exiting the mine, I attempted to put on a brave face, but this trip has shaken me up. It is clear that these lower shafts will need to be protected with scaffolding before we attempt to return to our previous point of exploration. It has also served as a warning to me not to get too carried away when exploring the mines. These underground spaces are full of hidden dangers and it is vital that precautions are taken before attempting to conduct any form of exploratory work.