Divining or Dowsing as it is also known, is the process of detecting underground metals and water sources. It is a highly contentious subject despite there being no scientific evidence to support the practice, yet many people do still believe in this medieval pseudoscience. 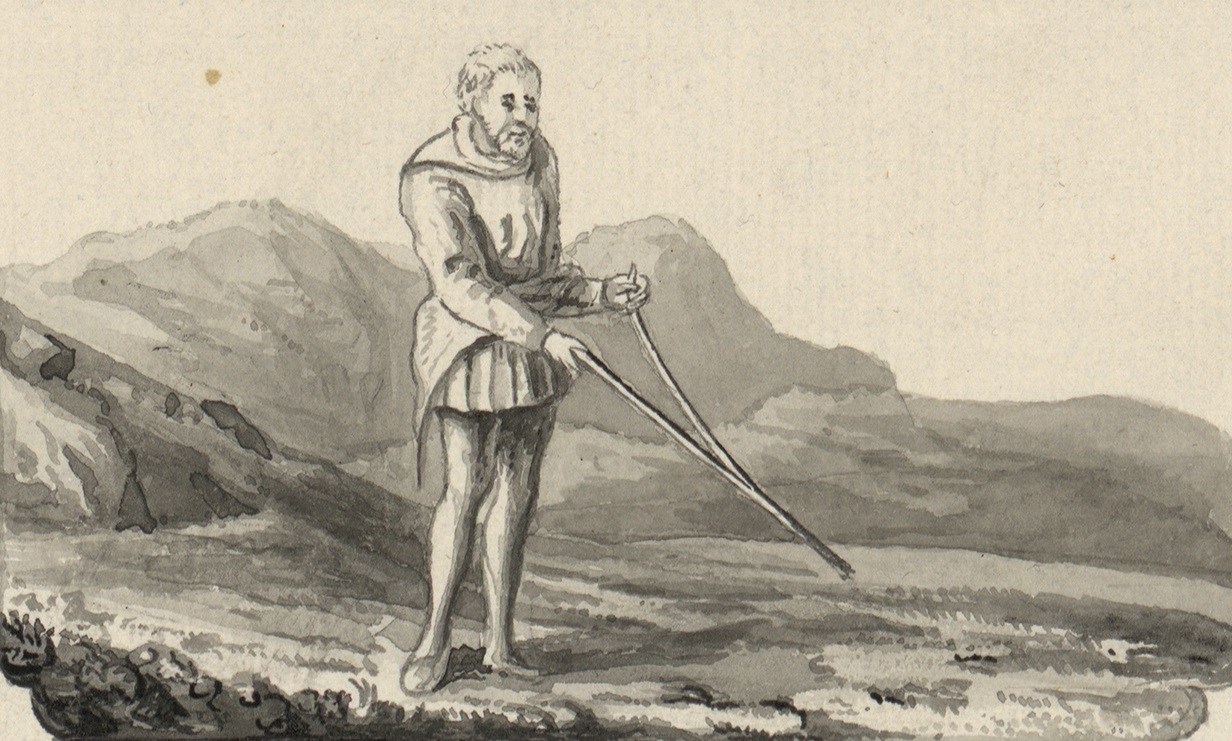 How is it Practiced

According to those that believe in the method, divining works on the body’s reaction to an unknown force that draws them towards the underground object to which they seek. This reaction is so small that diviners use one of three methods in order to amplify the signal. The first is to obtain a Y shaped branch of wood whereby the user holds one leg in either hand. Each leg is grasped with the fingers pointing upwards, and the junction of the legs is held in the air. The user then begins to walk across the area where he intends on locating a vein of ore or water source, and as he passes over the object, the branch will twist indicating its presence. Different types of wood are used for different metals although hazel bush is the most common, though it is believed that pitch pine is the best type of wood to detect lead. It is also worth mentioning that some believe the wood to be attracted to various metals, rather than the body reacting to this unknown force.

The second method of divining is to use two L shaped pieces of rod. The user holds the short ends of the L shaped rods in each hand, with the longer sections pointing out forwards at a 90 degree angle. Generally, the sections that are held by the user are encased in a sleeve that allows the rods to turn easily. Again, the user walks over an area and when passing over the vein of rock or water source, the rods turn inwards and cross over one another. The rods are made to move by a slight twisting of the wrists. The concept of the L shaped rods is to amplify these slight movements in the hands to a much more visible turning of the rods.

The final method of divining is to use a pendulum consisting of a weighted object connected to a chain or cord. As the user passes over the underground water source or vein of ore, the pendulum will react by swinging backwards and forwards or rotate in a circle. Again, the swinging motion is caused by slight movements in the diviners wrist which causes the object to move. 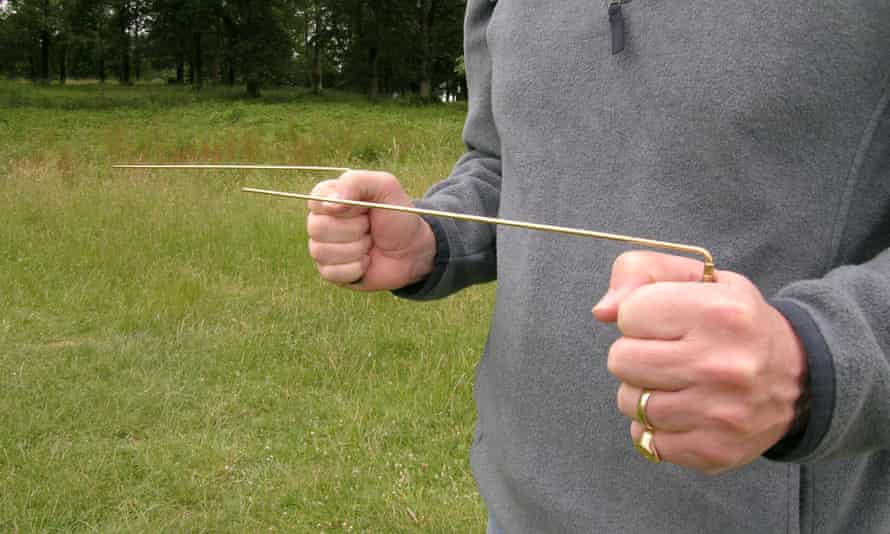 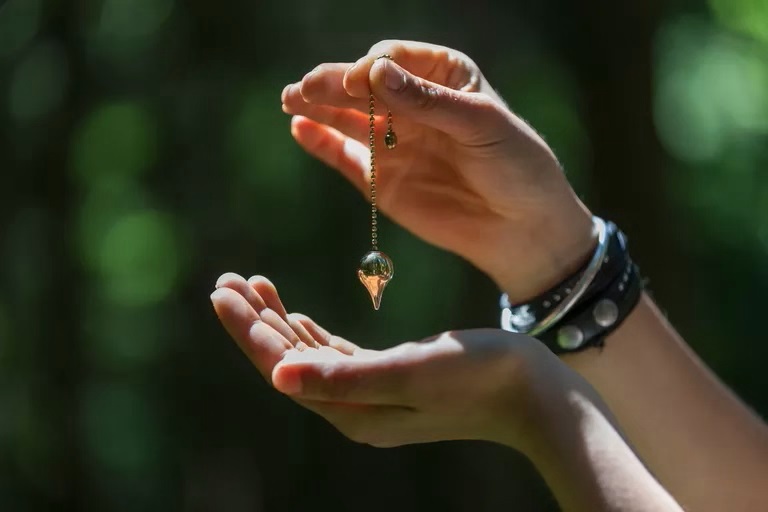 Shown below is a video of a diviner who claims to be able to not only detect the presence of water, but also the depth, volume, flowrate and pressure! 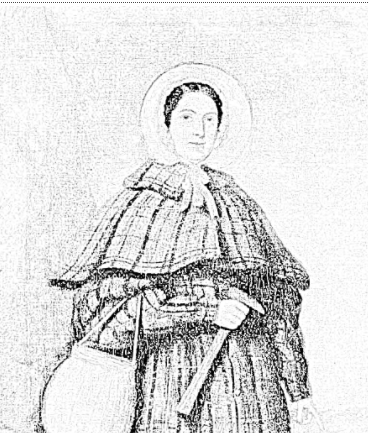 The History of Divining

The first recorded mention of divining was in 1556 by a German scientist Georg Agricola who wrote about the practice in his book De Re Metallica. The book describes working methods and processes within metal mining, with divining rods being mentioned as a method of finding metals. Even when it was first written, Agricola states that the value of this method is a subject of contention between miners, and even he rejected the practice as a serious method of prospecting. It is suspected that the belief in divining is of German origin, with the practice being brought over to Britain by German miners in the 16th century.

Given the mystical nature of the exercise, some in later centuries likened divining to sorcery, and a well-known user Martine de Bertereau who claimed to use divining in order to locate underground water sources and minerals, was arrested for a number of offences related to sorcery. She along with her eldest daughter died in prison sometime after 1642. Diviners would often baptize their rods by laying them in the bed of a newly christened child, and would name the rods after the child. This was done to dispel any notion that the diviner was a sorcerer.

A portrait of Martine de Bertereau

Diviners rely on anecdotal evidence when asserting their claims for the validity of the practice. You need only raise the topic down a local cavers pub, or pose the question on Facebook, and you will hear stories of diviners locating the source of burst pipes or undiscovered cave systems when all other modern methods had failed. At How Gill Mine on Grassington Moor, records describe the miners discovering a “deep cavernous fissure” down which they tipped a large amount of spoil. This mine is now inaccessible due to collapse, however in May 1963 a diviner and member of the Northern Cavern and Mine Research Society traversed the moorland above and “located the direction of the fissure”. Unfortunately, it is impossible to validate this claim as the shaft is completely obliterated. Unbelievably, in 2017 10 of the 12 UK water suppliers admitted that their engineers use divining in order to locate burst water pipes.

Throughout the centuries, attempts have been conducted in order to prove or disprove the practice of divining. In 1782 a practitioner by the name of Barthelemy Bleton underwent a series of tests in Paris which did not result in proving the theory. It was noted that when Bleton was blindfolded, he often passed over running water without noticing it, and when walking over the same point repeatedly he only indicated the presence of water 50% of the time.

In 1987 to 1988, an experiment was conducted in Munich by German scientists. The test was conducted in a derelict barn whereby on the ground floor, a 10 metre line was established along which a small wagon could be maneuvered. On top of this wagon was a length of pipe connected to a pump which circulated water. On the first floor another 10 metre test line was positioned in exactly the same place as the one on the ground floor. The test was conducted by moving the wagon to a point along the 10 metre line and instructing a diviner to indicate the location of the water pipe along the line on the first floor. A total of 43 diviners took part in the experiment with 843 single tests taking place. In order to ensure the tests were as accurate as possible, a professional magician was even brought in to evaluate the setup and highlight any opportunity for deception or cheating. The scientists also conducted a large amount of preliminary tests before the final assessments, using both salt and fresh water in the pipes. They also mixed sand and gravel in with the water, however none of these changes had any impact on the results. The preliminary tests also whittled down the most promising applicants from an initial pool of 500, down to a final group of 43. Whilst a small number of the final group did produce results more consistent that the rest, the overall results were completely random and the success of the top candidates can easily be put down to chance. This is further supported by the fact that the top performers were unable to reproduce their successes in further tests.

Despite believers providing anecdotal examples of when divining has been used to locate veins of ore or underground water courses, there is no scientific evidence in order to support the practice. Numerous experiments have been undertaken in order to prove the theory and each one has failed to do so. The twisting of the L shaped divining rods, or movement of the Y shaped branch is understood to be caused by involuntary muscle movement in the hands, similar to that experienced when using a Ouija board. It is referred to as the ideomotor effect where the body reacts involuntarily even when you are trying not to move. People misinterpret this as a 6th sense drawing them in a certain direction, however the movement is completely random.

In terms of real world examples of where diviners have located water sources, it is completely feasible to consider that they consciously or subconsciously react to features on the surface. This includes their prior experience of the land, observation of the soil, topography, vegetation and others, making the discovery of water more of an educated guess.

The discussion still causes fierce debate similar to that of the belief in paranormal entities, however as with stories of big foot and ghosts lurking in the tower of London. The only evidence to support divining is anecdotal and not taken seriously within the scientific community.

A sketch of Divining from the book De Re Metallica 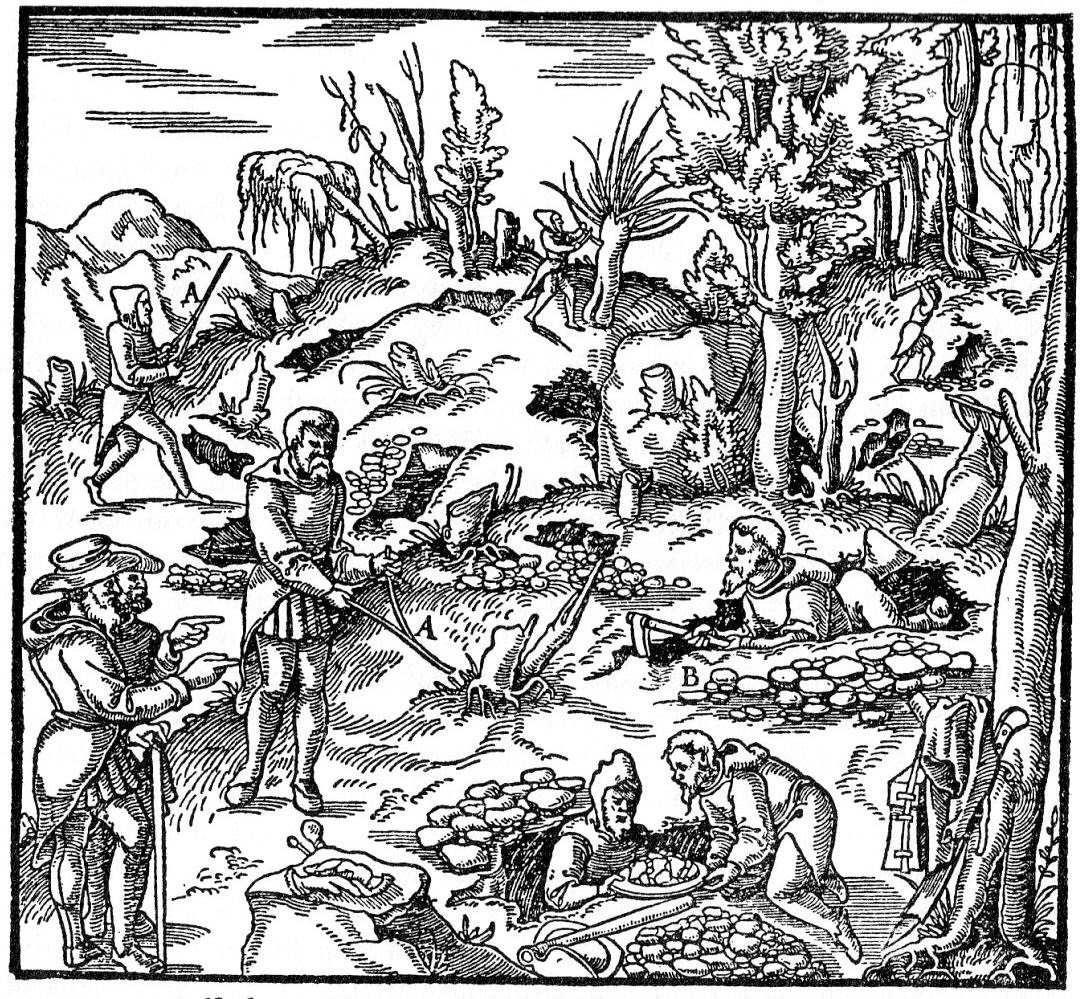