Little is known about mining accidents in Grassington as hardly any records have survived. What is known however, is that the accident rate was much less than in coal mines where the presence of explosive gas was a constant threat. The main causes of accidents and fatalities within the lead mines were roof collapses and falls down shafts and sumps. To a lesser extent there were also accidents during blasting activities however these were few and far between. The image below shows a large roof collapse witnessed a short distance along a 30 fathom (55 metre) deep cross cut in New Peru Mine. This mine was explored by members of the Grassington Mines Appreciation Group in December 2017. 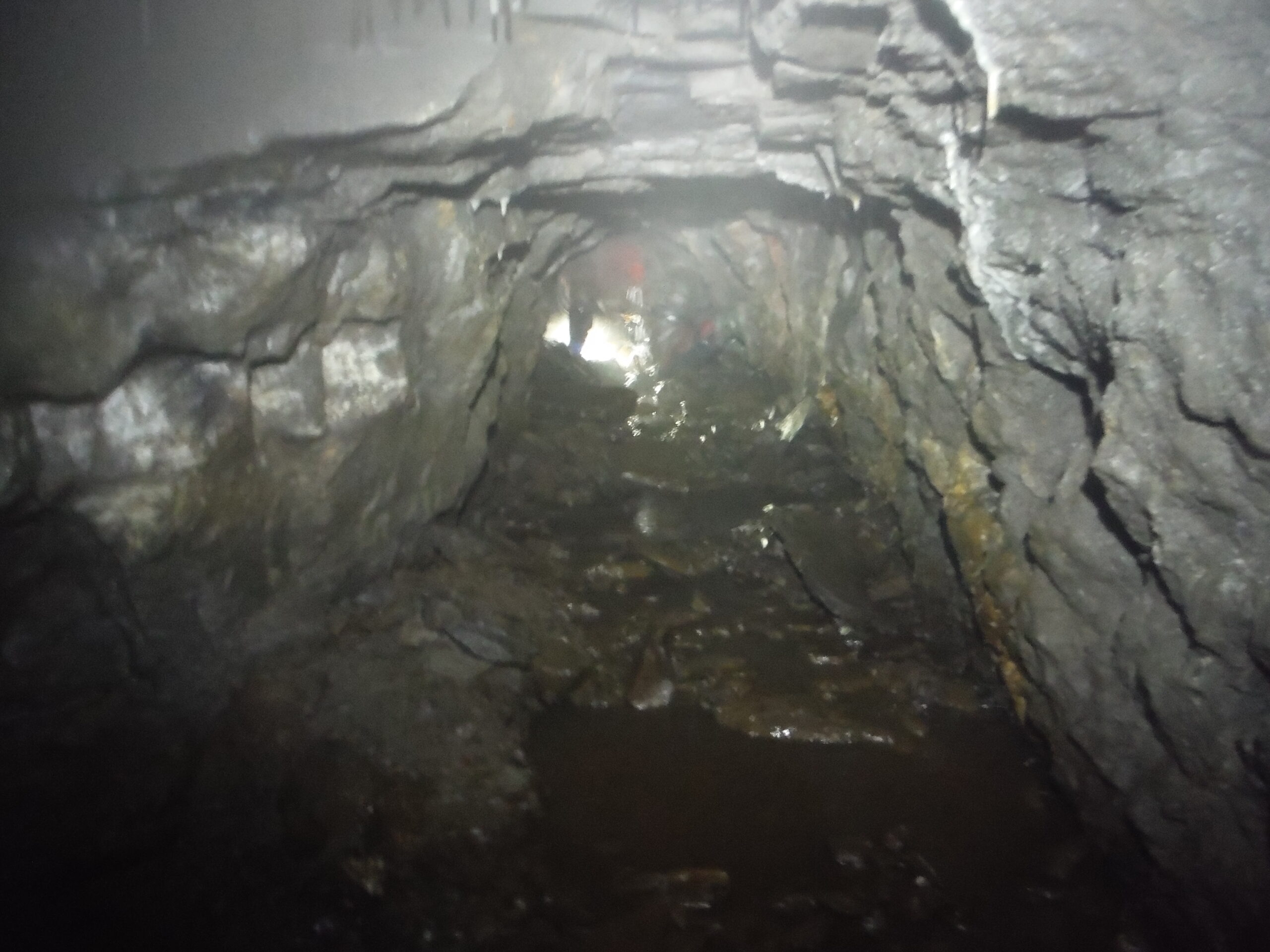 According to A History of Lead Mining in the Pennines by A.Raistrick and B.Jennings, 'In the four main northern Pennine areas, fourteen men over eighteen were killed by accidents in the years 1837-41.' From information taken from British Mining 13 published by the Northern Mine Research Society, the earliest account of a mining accident from the area was recoded by the Linton Parish Register when 'Ed Buxton of Skirethornes and Tebie Wilde were buried on the same day. "They died by the dampe in a grove ye 6 of ffeb 1639". Further to this, an article in the January 1853 edition of the Craven Herald recounts that on "16th December last, Thomas Rodgers was killed in Beaver Lead Mine by a large stone falling, and his great-grandfather, grandfather and mother's cousins were all killed in the mines on Grassington Moor". According to the actual article published on the front page of the newspaper "Poor Thomas Rodgers was working on the Beaver lead mine when a large stone fell on top of him, killing him instantly." Below is an image of Beever (or Beaver) mine's engine shaft. Note the portal entering from the top right hand side of the shaft which was used to direct the pumping rods down to the bottom. 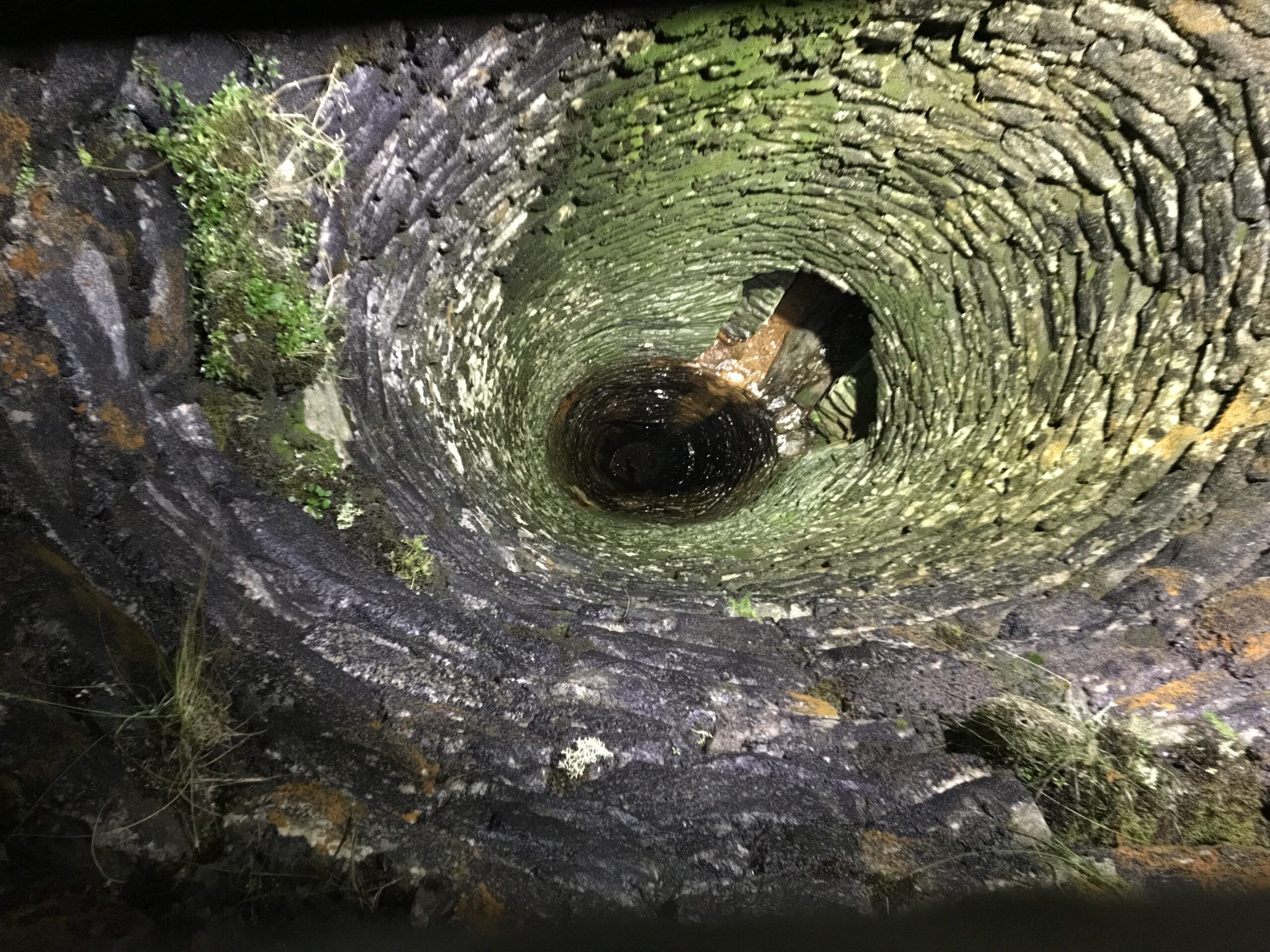 From information taken from British Mining 13, 'A Grassington family possessed for centuries what they called 'the pick' and whenever there was an accident, a member of this family had to take wine in it to the victim. It was apparently a pyx made of silver-lead and is thought that it may have been one of the sacramental vessles from Bolton Priory.'

The word Pyx is derived from the Greek language and means box or receptable. It is a small container used to carry the consecrated host to the sick or those otherwise unable to come to a church in order to receive Holy Communion.

The average lifespan of a miner in the Yorkshire Dales was around 45 years old. According to David Joys book Men of Lead, the average lifespan of the lead miners in Grassington was 46. Whilst this was slightly higher than the average for the area, it was in stark contrast to the national average of 56 years old in other professions. The average age of the miners was 30, however if they continued working into their early 40's, they would have to seek lighter jobs due to the heavy toll on their bodies.

The major cause of illness and death was due to various respiratory diseases known as 'miners consumption'. At the time, it was unknown why the miners suffered from these illnesses, however it is now known that the miners suffered from silicosis caused by fine particles of mineral dust scarring the lungs. They then died from a form of tuberculosis.

Within the British Medical Association's August 1857 journal, Dr Thomas Jackson of Darlington made note of the miners smoking habits. It was thought that the effect was beneficial in bringing up phlegm and relieving difficulties in breathing. Again this goes to show how little the early medical professionals knew of the harmful effects of smoking. An interesting section within the book Men of Lead is a quote from the 6th Duke of Devonshire's chief mineral agent James Ray Eddy who said, "In this district, I do not think that there is anything to damage the men's health, save boring in the gritstone; that is the bane of this country, and I believe that what I am trying to get them into at present, namely wearing a moustache, is the only preventative for it.

According to British Mining 13, many of the mining employers were reluctant to admit that there was a hazard to health and some openly stated that there was none. The agent for the Craven Moor Mines which was 6 miles to the East of Grassington Moor, stated that there was no particular disease among the miners 'in our parts' but did admit to there being a little asthma among them, and that too much powder smoke caused them to spit black.

In the image below, two miners can be seen drilling holes into the rock face ready for blasting. One miner holds the drill in place, whilst the other strikes with a hammer. (Credit: Beamish Museum). 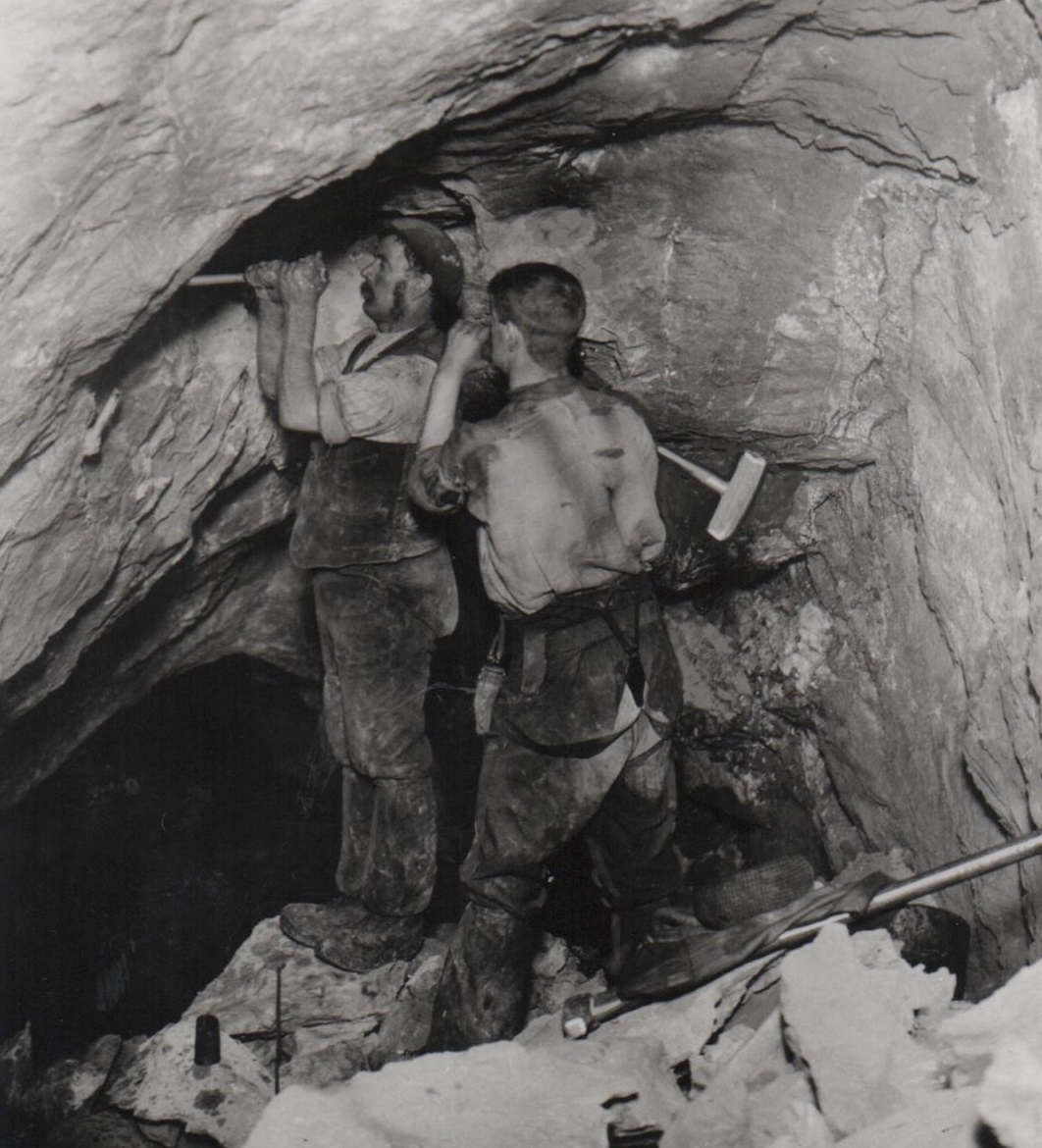 In 1862-1864, the Kinnaird Commission was setup to investigate the health and working conditions of the miners, however following it's publication, had little effect on their lives. In fact, following the invention of dynamite in 1866, production increased and led to further respiratory issues caused by the toxic fumes. Even with the Kinnaird Commission designed to review the health of the miners, dust was considered to be no more than a subsidiary cause of respiratory diseases. There is no mention of dust prevention measures within the report or within the Metalliferous Mines Regulation Act of 1872, and it was only in later research that the effect of siliceous dust on the lungs was linked to respiratory diseases.

With the absence of explosive gases, little regard was given to the issue of bad air. According to the book A History of Lead Mining in the Pennines, 'The Kinnaird Commission, which investigated the health and working conditions of metalliferous mines in 1862-64, reported ‘a striking uniformity in the causes to which the miners attribute the impairment of their health: these are bad air, powder reek and stour [rock dust]’. Both miners and medical witnesses stressed the harmful effects of foul air in the mines; both the testimony of the miners and the tests carried out by the officers of the commission showed that many mines were poorly ventilated. In this respect they compared unfavorably with coal mines, where the presence of explosive gases hardly ever encountered in lead mines, made good through-ventillation a necessity. The lead miners would usually continue to work as long as a candle would burn.'

The book goes on to describe how a Weardale agent told the Children's Employment Commission in 1842, that "It is not proper to stop after the candle goes out. Sometimes we must hang the candle half-perpendicular, so that the grease may flow down to the flame of the candle, and burn in spite of the foul air... It is very seldom that men stop in so long as to fall down and need to be carried out."

An excerpt from the Kinnaird Commission can be seen in the below image where the use of Stemples is described. (Credit: commons.wikimedia.org). 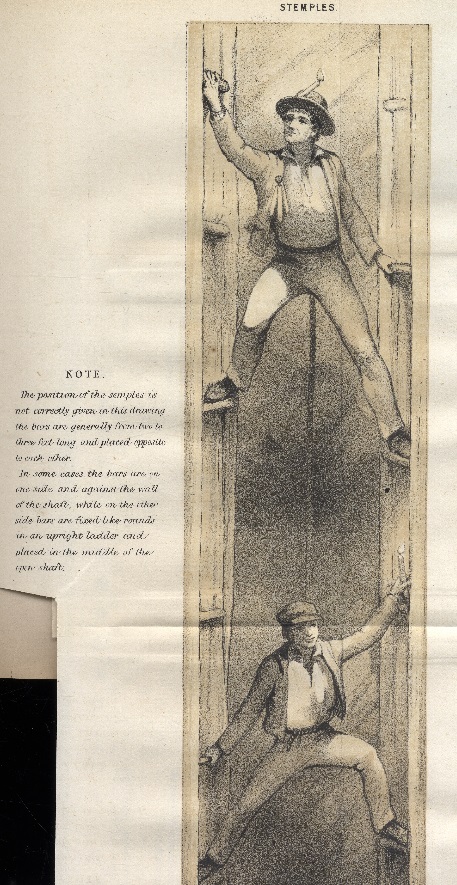 In order to combat the effects of bad air, various methods were employed to circulate air through the mines such as water blast, hand driven fans and zinc trunking. The fans were operated by boys aged around 14 and 15 and they were paid one shilling per 8 hour shift, which according to the National Archives would be worth around £4 in todays money. The concept of water blast is that a discharge of water down a shaft would induce a ventilation current in the mine workings.

A conversation described within the Northern Cavern and Mine Research Society's 1964 Memoirs, describes how zinc trunking was used to provide a water blast method of ventilation to a distance of 40 fathoms (73 metres). The trunking consisted of an 8 inch diameter pipe suspended on iron hold fasts and each section of pipe was 9 feet long. The pipes would be extended to within 3 or 4 fathoms (5.5 or 7.3 metres) of the blast face so as to provide effective ventilation, and the miners would use "flannel" to cover sections that had decayed away.

It goes without saying that mining was and is a dangerous profession. This was particularly true for the Grassington lead miners of the 18th and 19th centuries. Whilst avoiding many of the hazards present within the mines ranging from rock fall to silicosis caused by rock dust, the miners were paid a pittance for their work and routinely struggled to provide even the most basic necessities for their families. Even boys under the age of 10 would be expected to work down the mines, and were subject to the same hazards as their fathers, as they operated ventilation fans and other less arduous tasks.

Information taken from A History of Lead Mining in the Pennines:

Average annual number of deaths per 1,000 miners and per 1,000 males exclusive of miners, for 1860-62 inclusive. Information from the 6 most northerly counties in England.